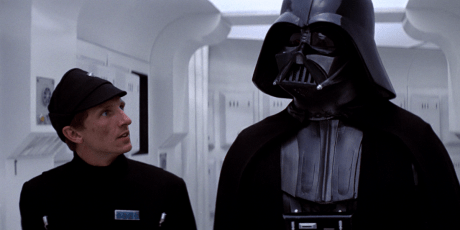 Yesterday the latest edition of Entertainment Weekly was released with an issue focused on Rogue One: A Star Wars Story. The cover represented this focus but also revealed the big news that iconic villain Darth Vader will officially be appearing in the film.

A press release on the issue stated:

“In this week’s issue of Entertainment Weekly, we bring you an inside look at ‘Rogue One: A Star Wars Story, which explores just how the Rebellion came to possess the information that revealed the fatal flaw in the Empire’s super weapon. It’s a battlefield heist that fans have been imagining for nearly 40 years, described in the opening crawl of 1977’s original ‘Star Wars’ with little details scattered throughout.”

Full details on what the issue included are as follows:

Director Gareth Edwards teased that both the Empire and Rebels are unfamiliar with Vader, saying:

“Within the Rebellion, it’s not commonly spoken about. Within the Empire, there is a culture of knowing of the existence of Darth Vader. There’s definitely an underlying feeling there is a power – a dark power – available to the Empire and if you overstep your mark, you will suffer the consequences.”

Lucasfilm’s Chief of Story development Kiri Hart did hint, however, that Vader and Ben Mendelsohn’s character Orson Krennic know each other and are not friends, saying:

“Vader doesn’t really play by the rules. He’s present in the military structure, but he’s not beholden to it. He’s not accountable to anybody really, except Palpatine.”

Finally, Edwards revealed that he had a “fanboy” moment on the set of Rogue One when Vader showed up. He said:

“I got goosebumps. I was so nervous to turn the corner and see him. You have to pinch yourself. Everyone became children again. You just go straight back to being a 4-year-old, like, in a heartbeat. There’s all sorts of rules about security on set, but I couldn’t help it. I got my phone out and started taking pictures of him, and pictures of him with me, because I felt like no one would believe that I’d met Darth Vader.”

Thoughts on this news? Are you looking forward to seeing Darth Vader’s appearance in Rogue One: A Star Wars Story?