The Star Wars saga returns to the big-screen with Star Wars: The Force Awakens, the seventh instalment in the Star Wars series. The film leaves a joyous message- Star Wars is back.

The Force Awakens brings together new and old cast members in an excellent way and brings an interesting story to the table. The search for Luke Skywalker makes for a great plot-line throughout and by the time Rey encounters Luke at the end of the film, it’s clear that the film has come full circle.

Rey (Daisy Ridley) is the first female lead character in the Star Wars films. While we’ve had previous female characters that acted among the leads (like Princess Leia and Padme Amidala), Rey is really the first and that was refreshing. The other two members of the new trio, Finn (John Boyega) and Poe Dameron (Oscar Isaac), are also refreshing and both are entertaining characters. The reveal that Rey is force-sensitive and wields a lightsaber was a well-kept secret and it was great to see both Rey and Finn use Luke (formerly Anakin’s) lightsaber in the film. 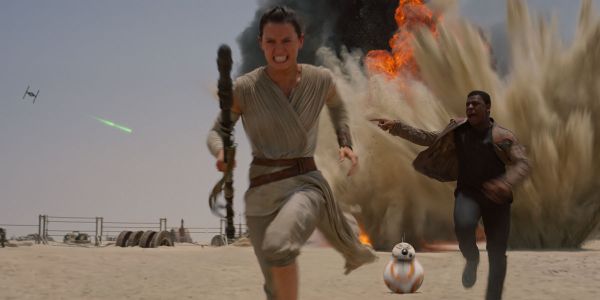 The villains in the film were hit and miss for me. Kylo Ren (Adam Driver) and General Hux (Domhnall Gleeson) both have large roles and have standout scenes, in particular Hux’s speech and the reveal that Kylo is really called Ben Solo (though the fact that he was a Solo wasn’t a big surprise). However, other villains like Captain Phasma (Gwendoline Christie) and Supreme Leader Snoke (Andy Serkis) are both underutilised which was unfortunate. Hopefully we’ll see more of Phasma and Snoke in upcoming films.

The film also has the return of many fan-favourites from the original trilogy. Han Solo (Harrison Ford) and Chewbacca (Peter Mayhew) have the most pivotal roles of the returning cast, but Leia Organa (Carrie Fisher) has a substantial role and Luke Skywalker (Mark Hamill) appears at the end of the film. C-3PO (Anthony Daniels) and R2-D2 (Kenny Baker) also return of the original main cast, with additional returns for Admiral Ackbar (Tim Rose) and Nien Nunb (Mike Quinn) from Return of the Jedi.

Unfortunately, no film is perfect and The Force Awakens does have a few stand-out flaws that I cannot avoid talking avoid. The opening hour of the film follows a very repetitive narrative (usually a hero scene followed by a villain scene) and this was a back-and-forth problem for the first hour of the film. Additionally, every other scene in the first hour either featured someone contacting the First Order or saying that they would. This pattern became (unfortunately) obvious after a while and let the film down. The other glaring problem with the film is Starkiller Base. While the superweapons name is an excellent touch (a reference to Luke Skywalker’s original script name of Luke Starkiller), it truly is just a much bigger Death Star. I was ok with a Death Star II in Return of the Jedi but this was re-hashing an idea for the sake of re-hashing. Note: Having a rebel character jokingly compare Starkiller Base to the Death Star doesn’t make the idea of re-hashing the latter vessel ok.

While it may be a bigger problem for some people than it was for me, it was clear that some scenes were almost copy and paste from the original Star Wars film (now referred to as A New Hope). The obviousness of this was a little unfortunate with obvious similarities between both films.

In my opinion, Star Wars: The Force Awakens has brought Star Wars back to the big-screen in a big way. The new and old cast members all played their roles perfectly, the cliff-hanger ending with Luke Skywalker sets up Episode VIII perfectly and there were lots of nice touches in this film. However, while the narrative and the Starkiller Base let the film down slightly, it’s clear that Star Wars is back and here to stay for a while.