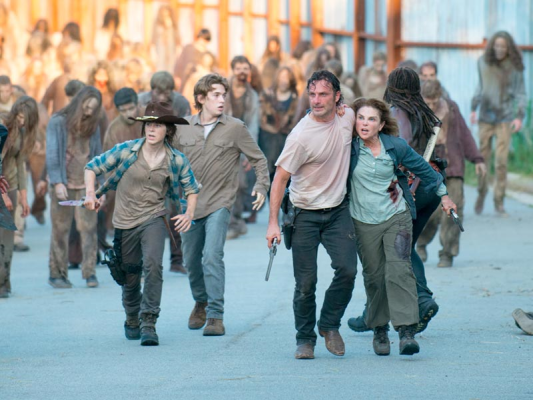 The latest episode of The Walking Dead sees the Alexandria Safe-Zone come under siege from the undead and the death of the Safe-Zone’s leader Deanna Monroe.

I have to be honest, I was a little disappointed in this episode. It’s a good mid-season finale but it could’ve been a lot better. It tried to include too much and I feel like that’s what let the episode down (which also leads into my complaint about the cliff-hanger which will come later in the review).

The decision to end an episode on a cliff-hanger is always a risky decision because of how fans may react, but unlike previous cliff-hangers which worked really well in the past (like the Season 4 finale at Terminus) I felt as if this cliff-hanger was forced upon fans at (arguably) the most critical moment of the episode. That said, the timing was still clever with the Walker sounds being made in pitch black, but I understand why a number of fans are unhappy with the cliff-hanger. I feel like the writers ended up having to do the cliff-hanger where they did because of how many other story elements were included in this episode, but that’s just my opinion.

That said, I think the cliff-hanger will instantly be forgotten when the show returns in February as we see the result of Sam calling out to Jessie (the comic fans should be able to make an educated guess).

However, the death of Safe-Zone leader Deanna Monroe was handled really well in this episode. I really liked how she got to have some heartfelt scenes (with both Rick and Michonne respectively) before she died, but also because she was able to choose to go out on her own terms by shooting at Walkers invading the house (we can presume she was devoured off-screen). As sad as Deanna’s death is, it was to be expected following Deanna giving Rick a larger leadership role a few episodes ago.

The idea of using Walker guts to get through Walkers has been used numerous times in the show, yet continues to be interesting to watch even after we’ve seen it several times and this episode is no exception to that.

We also see relations with Morgan Jones and Carol come to a head after Carol discovers that the Wolf Leader is still alive. Both Morgan and Carol are knocked unconscious as The Wolf escapes, though with all of the Walkers in Alexandria we’re left to question if he’ll even make it very far. 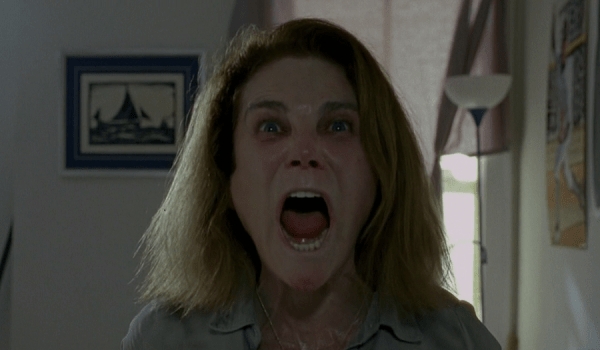 The episode also includes a post-credits scene where Daryl Dixon, Abraham Ford and Sasha (still on their way back to Alexandria) are stopped by a group of bikers. One of the bikers declares that everything they own now belongs to Negan.

In my opinion, this was a solid mid-season finale for The Walking Dead. While not particularly outstanding in my opinion, it does a good job of showing how quickly the Alexandria Safe-Zone has fallen. The death of Deanna Monroe was handled well and will be a crippling blow to the residents. I felt that the cliff-hanger was forced into the episode, but the post-credits scene with The Saviours teases at exciting things to come on The Walking Dead.

Fun fact: The episode reveals that the character who said “help” at the end of “Always Accountable” was Eugene Porter.