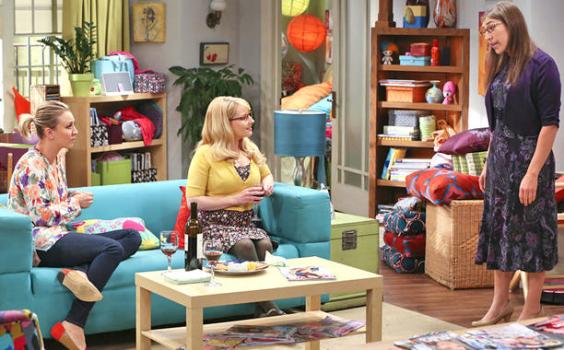 The latest episode of The Big Bang Theory sees the official introduction of Amy’s new boyfriend Dave, as well as sees Sheldon trying to find an intelligent woman.

Following the reveal in the previous episode that Amy has a new boyfriend (and they kiss), this episode sees the official introduction of her new boyfriend- Dave. I have to admit that while I was intrigued for Dave’s introduction, I was hoping he wouldn’t be a terrible character. I needn’t have worried because Dave added a lot to the episode and all of his scenes were hysterical, especially when professing his admiration for Sheldon (whom Amy didn’t want to talk about). Dave’s scene with Leonard was also really funny as well. I hope we get to see Dave featured in more episodes of The Big Bang Theory as the character is really entertaining. He’s the type of character the show needs right now when it’s not as entertaining as it was in the earlier seasons, and Stephen Merchant provides a lot of humour in the role. Seeing Penny, Bernadette and Leonard spying on his and Amy’s date was amusing.

Meanwhile, we see Sheldon, Howard and Raj looking to find Sheldon a new girlfriend. As Howard and Raj were the guys who found Amy for him in the first place, Sheldon decides they can help him with finding another girlfriend (a nice throwback to the first episode Amy appears in). Sheldon sets a challenge looking for a woman who is educated, intelligent and shares his interests but retains her own point of view, by completing a series of puzzles.

Fun fact: The woman who shows up at Sheldon’s door (Vanessa Bennett) is played by Analeigh Tipton, who previously played one of the models in the Season 2 episode “The Panty Piñata Polarization”.

The episode ends with Amy telling Dave that she doesn’t think things are working out with him, as he mentioned Sheldon a lot during their date. Might not be too long until Sheldon and Amy get back together…

In my opinion, this was another excellent episode of The Big Bang Theory. The official introduction of Dave added a lot to the episode and Sheldon enlisting Howard and Raj to help him find a woman was a nice throwback to Amy’s first episode. Now that Amy has seemingly ended things with Dave it will be interesting to see what happens next in Amy’s love life.