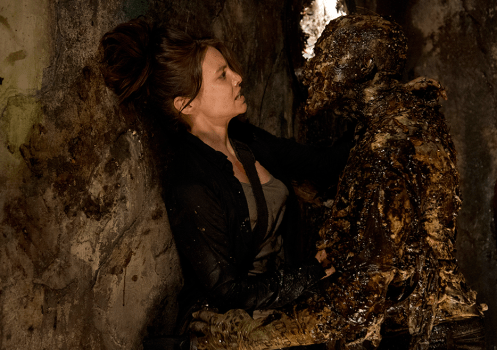 The latest episode of The Walking Dead reveals what fans have been predicting since the start of the season, reveals several important parts of the comics that are being integrated into the show and reveals that Deanna likes hitting Walkers anywhere but the brain.

While some fans have called this episode a filler episode, I couldn’t disagree more and I think this episode is very important to the season. While it does set up for upcoming events, it still stands out as an episode on its own. I’ll talk about the comic elements that are being integrated first…

This episode marked Lauren Cohan’s 50th episode as Maggie Greene in The Walking Dead, which makes you wonder if they were saving the reveal for this episode for that reason. Since the start of the season we’ve seen that Maggie isn’t going out on runs and Glenn is looking to keep her at Alexandria, so it shouldn’t come as a surprise to anyone that Maggie is pregnant. As Maggie is my favourite character I’m interested to see if they make any changes to the comic story-line with her baby, but only time will tell. Ever since the Season 4 premier (“30 Days Without an Accident”) there has been foreshadowing that Maggie would become pregnant so it makes you wonder if she was pregnant in previous seasons and we didn’t know. Food for thought. 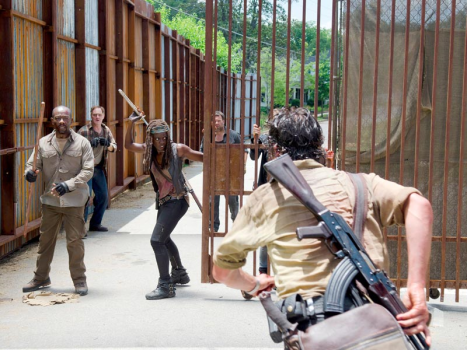 The second integration is Rick Grimes starting to take over leadership responsibilities at Alexandria. We see that Deanna is still in a daze following the attack by The Wolves and with Walkers at the gates (how on earth did Rick run past the whole herd?) she decides that the Safe-Zone needs Rick more than anyone, foreshadowing that he will soon be the leader of Alexandria.

The third and final integration is the start of Rick and Jessie’s relationship. Since they met last season we’ve seen that Rick has feelings for Jessie (including giving her a kiss on the cheek in one episode) and now that they’ve had a proper kiss in this episode it will be interesting to see how their relationship is explored from here.

While they’ve both been part of the show since Rick and co. arrived at the Alexandria Safe-Zone, I’ve been surprised at the lack of scenes with Deanna and Spencer together, especially as Tovah Feldshuh and Austin Nichols were promoted to main cast members. However, this episode gives us some great scenes with both characters and shows that Spencer is getting frustrated with Deanna. 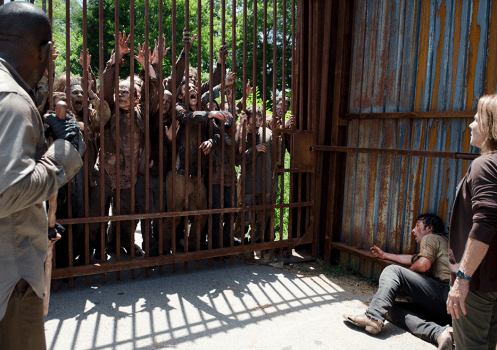 In an interesting twist, we also see that Denise Cloyd is either a lesbian or bisexual as she kisses Tara after saving Scott’s life. This is a twist from the comics where she is straight.

If you read our recent Doctor Who episode review you’ll know I think we saw one of the greatest TV speeches of all that time in that episode, but Jessie’s speech in this episode is also powerful and it’s great to see Jessie growing more as a character (not just with the growing relationship between her and Rick).

Random note: Anyone else think Rick teaching Ron how to shoot a gun is going to lead to something bad in an upcoming episode?

In my opinion, this was another good episode of The Walking Dead. While not outstanding, it does integrate several important parts of the comic series into the show. We learn that Maggie is pregnant, Deanna wants Rick to become the leader of Alexandria and we see the start of Rick and Jessie’s relationship. This is in some ways a set-up episode but I feel it stands out on its own and will lead to important events happening in the next few weeks.

Fun fact: Talking Dead revealed that the Sewer Walkers Maggie and Aaron came across were exiled Alexandrians that were trying to return.