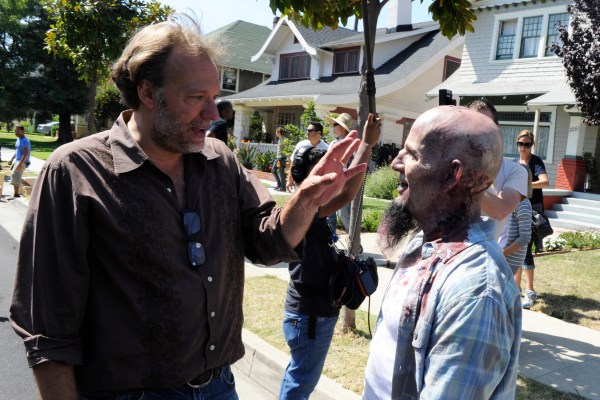 Greg Nicotero was already a legend to horror fans before being hired to work on The Walking Dead as the zombie make-up guru and an executive producer, but he always looks to give back to fans of his horror work by throwing in tributes to zombies from some of the horror films he worked on.

“There is a couple in the back half. You know what’s ironic, I had an awesome walker cameo that we put in a scene in episode six but in the editing process the scene was removed so the tribute walker got cut out. I’m still gonna do it at some point but I feel like after the fact, I missed a great opportunity. Because of the black and white in 6×01, I would’ve had a perfect opportunity to do a Night of the Living Dead homage and actually shoot a zombie in black and white and make it look like a scene from Night of the Living Dead. I kind of missed the boat a little bit there because I hadn’t anticipated that opportunity was gonna be there but there’s some great tribute walkers coming up for sure. There could be a little Tarman Return of the Living Dead, there could be another Dawn of the Dead… I put them in because I love doing them for us. You do thousands of make-ups and to have an opportunity to recreate a make-up or a character that you just loved, that inspired you, it’s sort of my nerd-version of paying back.”

Thoughts on what Greg said?