Following on from the previous episode of The Big Bang Theory, where both Sheldon and Amy consider dating new people, we learn that Amy has and Sheldon… hasn’t.

As I’ve said in previous reviews, I think some of the best parts of this season (so far) have revolved around Sheldon and Amy, and how both are dealing with their break-up. However, I liked the mix-up in this episode with the revelation that Amy has been dating new people and Sheldon hasn’t. Not only does this carry on well from the previous episode, but it stays true to Sheldon’s character while showing how much Amy has grown since her introduction on the show. It’s very rare that we get an episode where I say Sheldon and Leonard’s scenes are my least favourite of the episode, because both characters are the true heart of the show, in my opinion. In this episodes case, it’s not because I felt their scenes were bad but because I felt the scenes with the other group led to something and didn’t feel forced. We see Penny, Bernadette, Howard, Raj and Stuart try to set Amy up on a dating site (and joke at some of the guys with dating profiles) until Amy reveals that she has actually been on a few dates since breaking up with Sheldon. This is a significant step with her character because (until she met Sheldon) we know that Amy didn’t have a lot of luck with dating, so this was a big reveal. 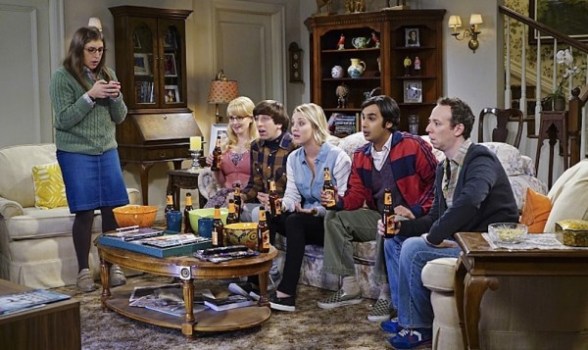 On the other hand, while the story behind Sheldon and Leonard’s need to get helium (to stop Swedish scientists from copying their Superfluid Helium theory) was interesting, I felt the execution let the episode down. I felt like the plot kept going backwards (between buying the helium from its owner and returning it) and then Barry Kripke suddenly offering them his helium at the end of the episode felt forced in my opinion (even though Sheldon and Leonard had tried to convince him to give them some of his helium earlier in the episode). The scenes with Kenneth (the helium dealer) were entertaining to watch though, and the dynamic between the three characters made for some humorous scenes.

In my opinion, this was another solid episode in the ninth season of The Big Bang Theory. While not outstanding, it was great to see how much Amy has grown as a character from her introduction back in Season 3. While the idea was interesting, the execution of the helium story is what let the episode down for me, though the scenes with Kenneth were entertaining to watch.