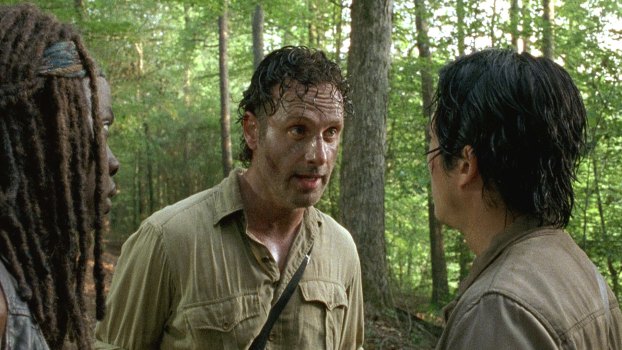 Week after week, Season 6 of The Walking Dead continues to impress with gripping action and intensity. Rick and his group along with the Alexandrians are tested to their limits on how well they can survive.

Episode 3 opens as we see Glenn and Rick running towards the horn sound with Michonne and others. Daryl, Sasha, and Abraham keep the herd moving. Glenn stays with Michonne and other group as Rick says he will go find RV while others return to Alexandria. Siren stops and walker attacks Alexandrians in group is attacked from behind. Michonne mercy kills him. Group questions what is waiting at Alexandria. They hear walkers and kill them. Weaker members of the group are bitten by walkers.  Briefly we are taken to the walker herd where Daryl rides away from Sasha and Abraham.

Michonne leads group to road out of woods. The group goes into an abandoned downtown to look for working cars and find none. They continue with injured group members to find a way out and encounter walkers devouring man and then find themselves completely surrounded by approaching walkers. Locking themselves in abandoned pet store, Glenn decides to make a diversion by setting feed store on fire so the group can escape. Michonne says she is not leaving without him. The show pans to Rick running down the road and kills walkers he encounters and takes their weapons. 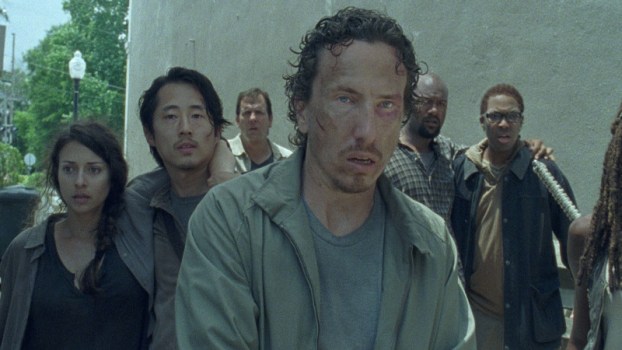 Michonne and Heath bandaging and tending to wounded. The injured and David insist to leave them behind. Michonne states no one is leaving anyone behind. Nicholas goes with Glenn to set the feed store on fire. While heading to destination, Nicholas kills walker who was one they left behind on a past run. They hear gunshots and so does group in pet store. Walkers drawn by gunfire and infest town. When they clear, Michonne advises them to head to feed store. Rick finds RV and drives off with it. Hearing banging at back door of pet store, the group prepares for an attack. Two Walkers got in and the herd did hear the noise from the struggle and head towards petstore.

The group charges at herd head on and lose one of the injured to the walkers. Glenn and Nicholas reach the store where it’s already burned down. They are surrounded by walkers and have no choice by to attack them to survive. Michonne struggles to get up the gate, but walkers grab the injured David and devour him. Nicholas shoots himself and then Glenn appears to be eaten alive. 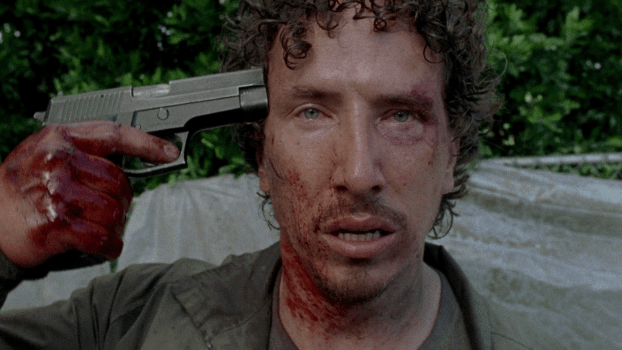 Michonne takes the remaining two and they continue to Alexandria by travelling through river. Rick uses his walkie to contact Glenn and no response. He does get Daryl to respond, but hears gunfire from Alexandria. Rick insists they move forward. Sasha and Abraham still leading herd. Members of The Wolves attack Rick in the RV out of nowhere. Daryl tries contacting him after hearing attack. Rick kills them both quickly. Rick sees more people sneaking around RV and shoots rapidly. Michonne’s group makes it back and Daryl regroups with the others to lead the herd.

The episode ends with Rick unable to start the RV with Walkers approaching. Overall, this whole episode is quite the roller-coaster ride with non-stop action and really pulling at the heartstrings. It ranks as one of the best episodes of the entire series. A lot of curve-balls are thrown, but it helps keep the audience on their toes and wanting more. I give the episode a solid 9 out of 10 rating.