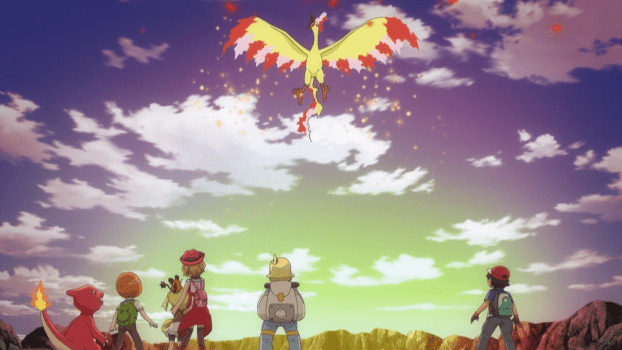 In the latest episode of Pokémon XY, Ash and co. are reunited with Trevor from the summer camp episodes a while ago. The episode also sees the Kanto legendary Pokémon Moltres appear in a featured role and Ash’s Fletchinder evolves into Talonflame, becoming the first of his Kalos Pokémon to reach its final evolution.

First of all, I really liked how Trevor’s return in this episode was handled. I have to be honest and admit that while I really enjoyed the summer camp episodes and the supporting characters they introduced (Tierno, Shauna and Trevor), I was unsure what they could do to bring Trevor back like they did with Tierno and Shauna following those episodes. I think they handled his return well and I thought the scenes with him geeking out over little details that made certain Pokémon unique funny (reminds me of collectors). Trevor’s Charmander evolved into Charmeleon off-screen (prior to the events of this episode) but still retains the spirit of the Charmander we saw in the summer camp episodes. 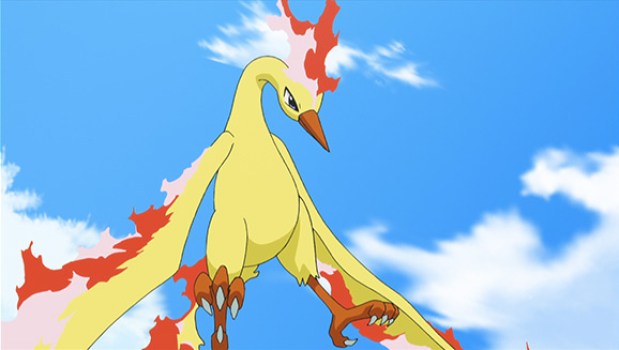 I was surprised at the inclusion of Moltres in this episode. As a long-time Pokémon fan, I definitely enjoyed seeing it on-screen again and seeing the XY characters (Serena, Clemont and Bonnie) getting to see Moltres up close. However, considering it’s one of the Kanto region’s legendary Pokémon and not one of the Kalos regions it felt out of place. I think we’ve already seen the legendary Kalos Pokémon introduced in this series so I can understand if the writers didn’t want to use them again so soon, but the inclusion of Moltres did feel a bit forced even though it was great to see it again. I think I would have liked seeing it more if there was more of a story behind a Moltres being in the Kalos region (other than what was said in the episode regarding the mountain).

After Ash and co. meet up with Trevor, the plot of the episode revolves around the group trying to find and see Moltres (hasn’t Ash seen a Moltres before?). Naturally, Team Rocket overhears and tries to capture Moltres, which angers Moltres and it starts attacking everyone (including the heroes when Team Rocket have long been sent blasting off). This leads to the biggest moment of the episode (and quite possibly one of my favourite scenes in the XY series). As the group is about to be attacked directly by Moltres, the tired Fletchinder flies directly in front of the fire attack and in the midst of the attack begins to evolve (similar to how Fletchling evolved into Fletchinder earlier in the series) and after the attack is over Talonflame is revealed, though Ash quickly needs to show is recklessness again in order to save it by jumping to catch it (and subsequently almost falling into the volcano). However, his act of recklessness convinces Moltres that they are good and Ash and co. are able to leave (with Trevor having taken an excellent picture of Moltres for his collection). 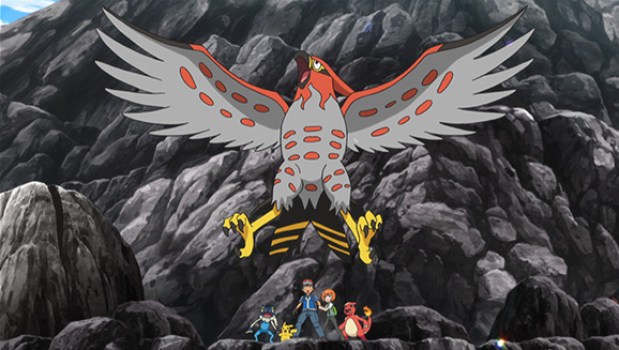 In my opinion, this was an outstanding episode of Pokémon XY and shows Pokémon at its best following a couple of (relatively) average episodes. Seeing the return of Trevor in a supporting role was great, it was a treat to see Moltres appear (though the episode could have benefitted with an actual explanation for why a Moltres is in the Kalos region) and the evolution of Ash’s Fletchinder into Talonflame was handled excellently. Anyone else feel that the best evolutions of the XY series have been on Ash’s trusty flying-type? The Fletchning-Fletchinder evolution is still my favourite of the XY evolutions, but this one is a close second.

Note: Talonflame learns the move Brave Bird and Ash acts like it’s the first time he has seen that move (Diamond & Pearl anyone)? It’s not like one of his Pokémon in that series had that move or anything…