Star Wars: Rebels picks up where its second season premier left off- with the Empire on the way to hunt the stranded rebels and clone troopers.

Just like in the previous episode, it was interesting to watch the interactions between the rebels and the clone troopers- especially with Ezra Bridger and Captain Rex, who work great together in this episode. Even Kanan has a (very near) change of heart towards the clones by the end of the episode.

However, it was even more interesting to watch the clones taking on the Empire’s Stormtroopers (albeit it was a walker battle). That said, it was pretty exciting for me as a long-time Star Wars fan seeing Republic and Imperial walkers fighting (the clones using their modified AT-TE and the Empire using their AT-AT’s). The moment where the clones bash one of the AT-AT’s legs so hard it falls over was incredibly shot. Even though it wasn’t quite a ground battle between both sets of troopers (which I’m still hoping to see), it was still excellent. 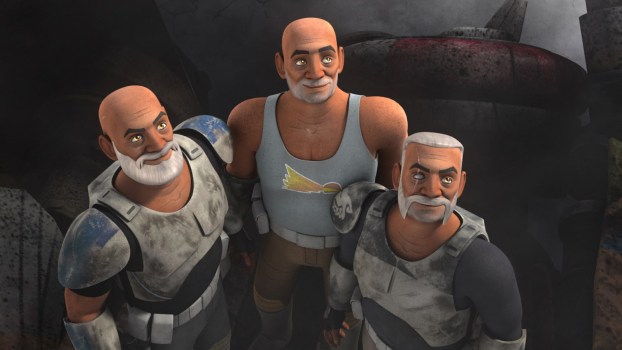 As we saw many times in Star Wars: The Clone Wars, the clone troopers again show how heroic they are prepared to be when Rex, Wolffe and Gregor attempt to divert Agent Kallus’ attention away from the rebels escaping on the Phantom (the scene where they charge the AT-AT’s has to be on my favourite scenes in Rebels so far). In the end it was great that they decided to join the rebels after all (though they didn’t have much choice with the AT-TE being destroyed).

The episode also features the debut of one of the new inquisitors, the Fifth Brother. We learn that he has been dispatched by Darth Vader to succeed where the imperials tracking the rebels (Kallus and Admiral Konstantine) have failed, so it’ll be interesting to see him take on the rebels very soon. Note: The Fifth Brother’s design was based on an un-used concept for this years’ Star Wars: The Force Awakens.

The episode ends with a heartfelt (and hug-worthy) reunion between Ahsoka Tano and Rex, something fans of Star Wars: The Clone Wars could have only dreamed of happening when The Clone Wars was cancelled. Dreams do become realities and this episode ended on a really positive note for Star Wars fans. I think I speak for everyone when I say that I can’t wait to see a lot more scenes with Ahsoka and Rex in Rebels. In my opinion, this was another excellent episode of Star Wars: Rebels. The episode handles the rebels and clone troopers working together really well, a walker fight, the introduction of the Fifth Brother and an amazing reunion with Ahsoka and Rex. If I had one (albeit small) complaint about the episode, it would be that most of the funny lines in this episode were already shown in the Season 2 trailers. However, that doesn’t majorly detract from another outstanding Rebels episode.