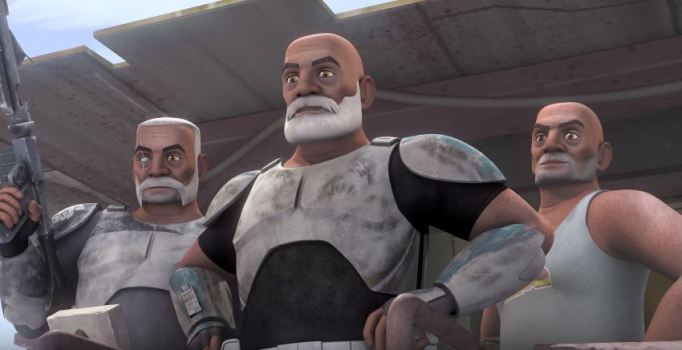 After what felt like a long wait following the jaw-dropping “Siege of Lothal” episode, the second season of Star Wars: Rebels began airing with the episode “The Lost Commanders”.

With 15 years having passed since the end of the Clone Wars era, it’s notable that all three troopers have changed in some way- especially with their accelerated aging making all three old men now, but at the same time Rex and Wolffe do still act a lot like they used to, while Gregor has gone bonkers (but very entertaining to watch). Although, does anyone else think it’s a strange trio of clones? I know Rex and Wolffe encountered each other, but Gregor was never seen with either of them before. We’ll have to wait and see if there’s an explanation for how the three came together.

I’ll be the first to confess, I was hard on Rex in The Clone Wars. There were times when I felt he was over-rated and others where I felt they tried to give him character development and it didn’t quite work, but I will say the Rex we’re introduced to in Rebels is superb. Here he’s still a lot like the Rex fans have loved for years, but at the same time he feels he has gotten too old to fight and wouldn’t be of use to anyone. It’s very sad to watch when you consider how sure of himself he started off as in The Clone Wars, before beginning to question the point of the war later on in the show and that carries on into who he is in Rebels. I found myself more interesting in watching Rex in this episode than towards the end of The Clone Wars, and that’s a major compliment on how they brought him into Rebels. 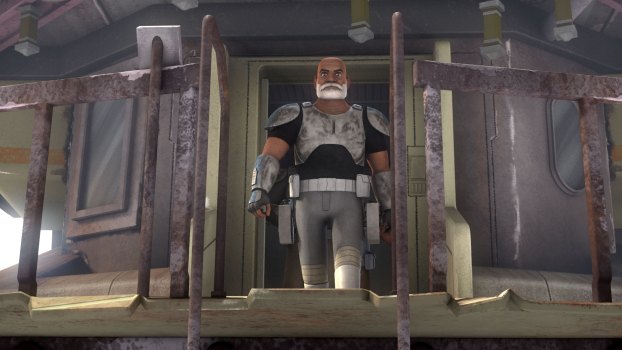 In contrast, Wolffe has always been a darker clone compared to Rex and Gregor (though it’s hard to compare him to the latter who only appeared in one episode of The Clone Wars). While Rex was the main clone of The Clone Wars, Wolffe has always been my favourite (and supervising director’s Dave Filoni as well) and I found it really interesting what they did with Wolffe in this episode. It made sense that if any of the three clones would contact the Empire, it would be Wolffe (considering Rex is loyal and Gregor is crazy). However, the revelation that Wolffe not only contacted the Empire but was ignoring Ahsoka’s transmissions was a big reveal, but I think Rex will forgive him as Wolffe was trying to protect Rex and Gregor. We’ll see if the rebels will forgive him too…

On the topic of the rebels, it was very interesting to see how they all reacted to the clones because they were all going to react in different ways- Kanan naturally is wary of them because of Order 66 (even though the three clones removed the brain chips from their heads), Ezra just sees people that want to help them and Sabine and Zeb seem to like the three as well. We’ll have to wait and how if the way they feel about the clones changes in upcoming episodes, especially as far as Kanan is concerned.

The three clones weren’t the only references to The Clone Wars series in this episode (not counting Ahsoka’s appearance at the start of the episode either). There were actually a lot of small references to the show you may have easily missed, including- The head of a Separatist Tactical Droid, the modified AT-TE walker, the Joopa having the same sounds as some of the Umbaran technology and part of the Ryloth soundtrack being used in the Hera/Kanan talk scene. 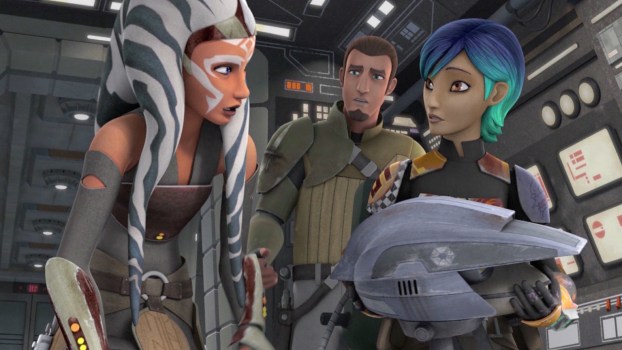 The revelation that Wolffe contacted the Empire is compounded when a Probe droid follows them and attacks, damaging the Phantom’s engine and leaving the rebels stranded with Rex, Wolffe and Gregor. The next episode is bound to be interesting to see how they fend off the Empire.

In my opinion, this was an excellent start to the second season of Star Wars: Rebels. The appearances of Rex, Wolffe and Gregor from The Clone Wars was a treat to see (though still an odd trio) and there were lots of great The Clone Wars references in the episode. The reactions of the rebels to the clones was also interesting, and the reveal that Wolffe contacted the Empire was a major twist. This episode sets up for what should be another very interesting season.