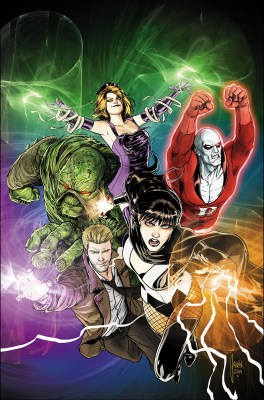 New reports indicate that Warner Bros. are moving ahead with their plans to make a movie based on the Justice League Dark comic book series. The movie is being said to have been retitled Dark Universe, with Scott Rudin producing. The studio plans to begin shooting in 2016.

The movie has been talked about for several years now. Initially, Guillermo del Toro wrote the script and was ready to direct. There were even talks of linking this movie with the cancelled TV series Constantine and going as far as getting Matt Ryan – the actor who portrayed Constantine in the series – to reprise the role in the live-action adaptation of Justice League Dark. However, currently it is being reported that del Toro will only stay on the project as a producer. For those who do not know, Scott Rudin is a man behind many famous Hollywoods movies and TV shows like Captain Phillips, Ex Machina, The Newsroom and The Fantastic Mr. Fox. His involvement with Dark Universe is a good sign.

Justice League Dark was a launch title in the New 52 revamp of DC comic book universe. The team of the same name was originally made up of DC characters John Constantine, Madame Xanadu, Deadman, Shade, the Changing Man and Zatanna. As shown by the lineup of characters, the team consists and deals with the more supernatural side of the DC universe. Eventually, characters like Swamp Thing and DC’s Frankenstein also joined the roster.

Thoughts on the involvement of Scott Rudin with Dark Universe? Which members of Justice League Dark are you most excited to see on the big screen?