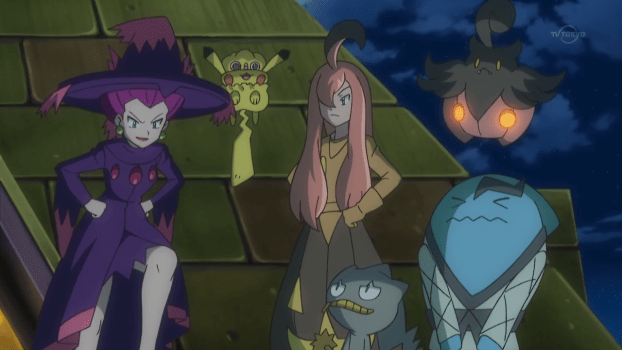 The latest episode of Pokémon XY not only features the first festival in a while, but the first Jessie-centric episode in a while and (after how good the last one was) this was bound to make for an interesting episode. Note: Anyone else notice that Ash and co. read the first part of the episode title and Jessie the second part?

Surprisingly, the episode turned out to be a complex episode in some ways. Team Rocket is approached by the head of a castle, Count Pumpka, whose Pumpkaboo has taken a liking to Jessie’s and Team Rocket pretends Ash, Serena, Clemont and Bonnie are criminals leading to multiple interesting confrontations.

However, the most complex parts of the episode revolve around Jessie and Pumpkaboo (some turn out well and others left me scratching my head). Count Pumpka wants to trade his Mawile for Jessie’s Pumpkaboo so the latter can be in a relationship (without stating the word ‘relationship’) with the prince Pumpkaboo. Even though Jessie gives a speech about how their hearts one (and stating that Pumpkaboo was the only one to remember her birthday). Somehow I can’t quite believe that when she has been with James and Meowth since the start of the show… and other things that made little to no sense. It would make sense if there had been any development with the two, but bar the early XY episode where she catches Pumpkaboo is there any major development with the two? It was like this was the episode for development but that led to some things (like the birthday flashback) not making any sense, however little things were revealed like that it is female which was nice. 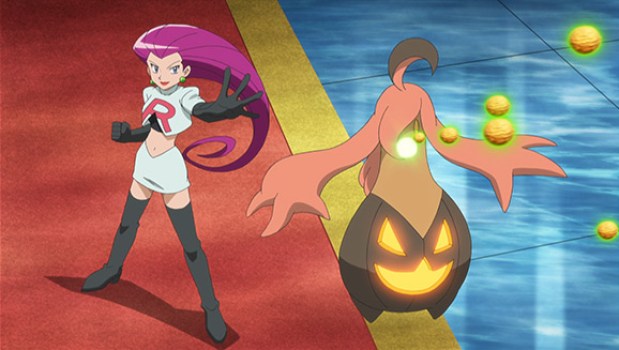 Minor complaints aside, Jessie has a change of heart and (against Pumpkaboo’s wishes) makes the trade. However, upon Count Pumpka opening Pumpkaboo’s Pokéball, it suddenly evolves into Gourgeist (the last Team Rocket Pokémon to evolve was Yanma in the Diamond & Pearl series). It was a very nice evolution scene but again it felt weird given the lack of development prior to the episode (I guess all of the battles against Ash and co. may have helped). It gets more interesting as Pumpka’s Pumpkaboo is no longer interested in Jessie’s Pumpkaboo now that it’s a Gourgeist, so Team Rocket decide to reveal themselves, attempt to steal some Pokemon and end up blasting off. Story of their life.

The episode concludes with Ash, Serena, Clemont, Bonnie and Count Pumpka watching the conclusion of the festival with a fireworks display. 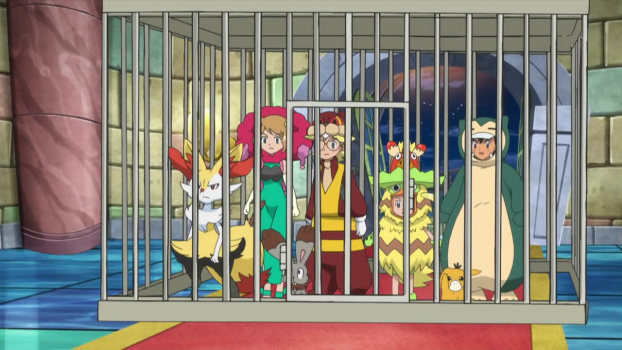 Can I take a moment to say that the gang’s festival costumes were all excellent? Serena’s Florges costume was especially great, and the reference to previous episodes by having James disguised as a girl was funny. Speaking of references, Inkay uses the same Pikachu disguise from an older episode of the XY series.

In my opinion, this was a really good episode, but at the same time an episode that had its flaws. The plot was pretty complex and I think the writers handled that area well, and it was good to see Jessie get her second centric episode of the XY series. While the interactions with Jessie and Pumpkaboo (later Gourgeist) in the episode were good, there were confusing moments in this episode that stemmed from a lack of developing their relationship prior to this episode. Even though the episode was Team Rocket focused, on the heroes side their costumes were all nice and there were various nods to previous episodes sprinkled in this episode if you caught them. A really good episode that suffered slightly from the lack of development with Jessie and Pumpkaboo prior to it.