First of all, before I go into the characters and plot of the pilot episode- I do want to say that Fear The Walking Dead is both different and similar to the main series. The location, characters and timing (the show being set at the very beginning of the apocalypse) are the obvious differences but it still feels very much like part of The Walking Dead universe. This is done (in my opinion) by Fear being very similar to the main series in that it focuses on dialogue and is character driven, without being a casual action-packed zombie flick.

I found the characters of Fear The Walking Dead (that we’ve been introduced to so far) to be very interesting and believable. Drug addict Nick Clark is by far my favourite character so far played superbly by Frank Dillane (who also appeared in Harry Potter and the Half-Blood Prince). I think it was a great idea that a drug addict would be the first character to see a Walker (his friend Gloria). Travis Manawa, played by Cliff Curtis, also stood out to me and it’s interesting to see him trying to play a role in the Clark family (we only get one or two scenes with the other Manawa family members Liza Ortiz and Christopher though). Madison Clark (Kim Dickens) and Alicia Clark (Alycia Debnam Carey) do a good job in the other lead roles but didn’t stand out as much to me.

As for the supporting cast, Tobias (Lincoln A. Castellanos), Art Costa (Scott Lawrence), Matt Sale (Maestro Harrell) and Calvin (Keith Powers) all contributed well in their supporting roles and made me want to see more of them (except Calvin, of course, as he dies in the pilot). If I did have one complaint about the pilot (though taking into consideration it’s the start of a pilot episode so it makes sense why this complaint happens) is certain locations appearing frequently throughout the episode, examples including the church and hospital. It’s a small complaint but I felt like we could have seen a little less of both locations as it sometimes felt like we kept coming back to both.

Here’s something that I have to admit surprised me. In the main series there are certain elements regarding Walkers that aren’t really revealed right away (or were in the main series but I was expecting them to be more dragged out in this series). Two elements that come to mind are regardless of how you get killed you become a Walker and headshots. I’ll talk about both in a bit more detail:

On the topic of Walkers, seeing fresh Walkers again was very interesting seeing as most Walkers in the main series now are very decayed (even recently turned Walkers don’t have quite as fresh a look anymore). 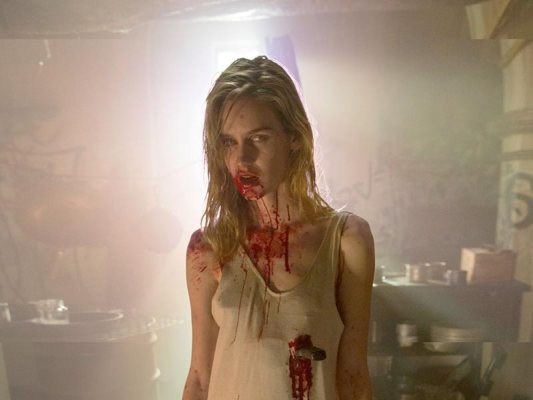 As far as deaths that take place in the pilot, there aren’t very many if you think about it. Gloria dies off-screen and is introduced as a Walker, an Old Man dies and two junkies are found dead. The only significant death is Calvin. I felt the scenes with Calvin and Nick were really well done and I think the build up to Calvin’s death was great (it made sense that Calvin would attempt to kill Nick to stop anyone finding out about his drug operations). I thought that death scene was really well done and props to both actors for a well done fight scene.

In my opinion this was a solid start to Fear The Walking Dead. If you’re worried that the show will feel too much like a “spin-off series”, I don’t think you’ll have anything to fear as the show is different enough with the similarities mostly being in that Fear is dialogue and character driven just like the main series. There isn’t a lot of action in the pilot but honestly I wasn’t expecting much (if I’m being honest I expected the first 30 minutes to only show human characters and the rest might include running into a couple of Walkers) so I was surprised when we got our first Walker (Gloria) within three minutes. I think it was great they spent so much time building up the characters in the pilot and this will give them more time to explore other things as the show moves on.

For what it’s worth, here is something else I have to say- If you’re going to compare this pilot to the first episode of The Walking Dead, “Days Gone Bye”, you’re definitely not going to enjoy the Fear The Walking Dead pilot as much as you could otherwise. Fear starts right at the beginning of the apocalypse and in the main series the apocalypse has already been happening for a few months. This means the main series could get right into the bones of the apocalypse while Fear has to build it up.