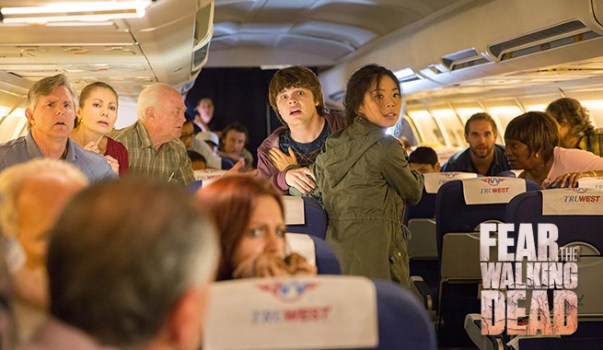 Recent reports indicated that AMC was planning a The Walking Dead special featuring Walkers on a plane, and now AMC has officially announced the web-series (which will tie-in with Fear The Walking Dead) which will be titled Flight 462.

A description of the web-series is below:

“Flight 462” will be the title of the 16-part in-flight zombie drama. The series will begin October 4, the night of Fear The Walking Dead’s finale, and air as promos with each subsequent episode of The Walking Dead, which begins its sixth season the following week. Each episode will be less than a minute long.

Fear The Walking Dead: Flight 462 tells the story of a group of passengers aboard a commercial airplane during the earliest moments of the outbreak. Over the course of the series, the plane and the lives of its passengers are put in jeopardy once they discover an infected traveller. The series is written by L. Signorino and Mike Zunic and directed by “Fear” director of photography Michael McDonough.

If you recall, in the third episode of Fear The Walking Dead (“The Dog”), Nick Clark noticed a plane flying overhead which has led many fans to speculate that it could be the plane featured in this special.

Also, as hinted in the previous report one character from the web-series will become part of Fear The Walking Dead’s cast in its second season.

Thoughts on this announcement? Are you excited for the Flight 462 web-series?