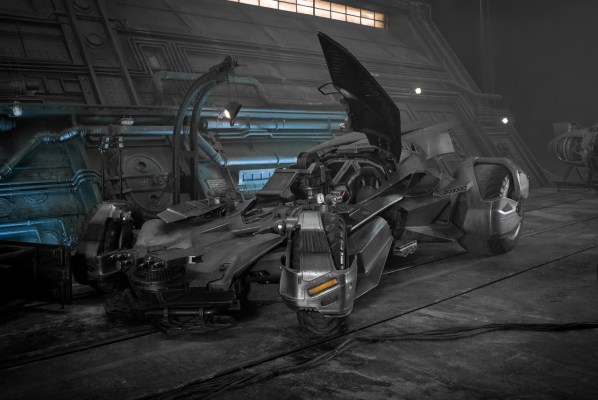 Warner Bros. and DC Films have revealed the first look at the Batmobile that will feature in the Justice League two-part movie.

While the Batmobile is similar to the design seen in Batman v Superman: Dawn of Justice, there are a number of changes to its weaponry which can be seen in the image at the top of the article. Concept art reportedly also showed a large cannon attached to the top of the Batmobile.

Production designer Patrick Tatopoulos also pointed out some of the new additions to the Batmobile to news outlets on the set. The new additions include new machine guns on the front and sides of the vehicle, in addition to more cannons and missile launchers.

The outlets were also shown a look at the set and concept art for Bruce Wayne’s “Crawler” vehicle which will be used to infiltrate a nest of Parademons, in addition to the Justice League troop carrier. This vehicle will be used to carry the team and the Batmobile into battle under the name “Flying Fox.”

Thoughts on this first look? Are you looking forward to seeing this Batmobile in action in the Justice League movie?