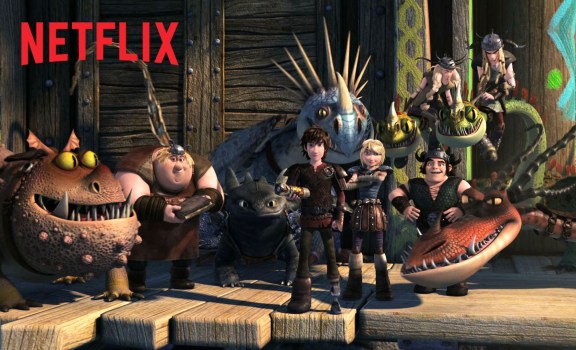 Host Ruari Williamson asked them to talk about the things fans can look forward to in the third season. “You will be able to see the musical”, Sloan replied. “We think it’s one of our best episodes and is really funny.”

“Those are very important dragons”, Sloan added. Brown continued, “Those are ones to keep an eye on because they have bigger stories ultimately attached to them.”

The showrunners also revealed that long-time villain Dagur the Deranged will get his own dragon. “You’ll also see Dagur get his first dragon, which is really cool and hilarious”, Brown stated.

Gobber the Belch hasn’t appeared a lot in the Race to the Edge series, but the showrunners revealed that the upcoming episodes will reveal how he got his dragon Grump from How To Train Your Dragon 2. “You’ll see how Gobber got Grump”, Brown said.

Story has always been an important element in the How To Train Your Dragon franchise and the next episodes of Race to the Edge will be no different. “In terms of story, you’ll really see how the Dagur, Heather and {Dragon} Riders story plays out. You’ll {also} see some good emotional stuff between Hiccup and Astrid”, said Brown.

Chicken has become a fan-favourite since its introduction in Race to the Edge. Chicken is also a favourite with the crew of the show and Sloan and Brown promised more of Chicken this season. “You’ll see some more of Tuffnut and Chicken. We love Chicken”, Brown said. “Chicken’s one of our favourite characters”, Sloan added.

Adelaide Kane (Reign, Teen Wolf) joins the cast in the next batch of episodes. “We introduce a new tribe and she’s part of that”, Sloan said. “They’re called the Defenders of the Wing”, Brown added.

This extract from our interview with the showrunners can be listened to below:

You can listen to the full interview here:

The third season of Dragons: Race to the Edge will be available on Netflix starting tomorrow.

Thoughts on the new details? Are you looking forward to the release of the third season of Dragons: Race to the Edge tomorrow?