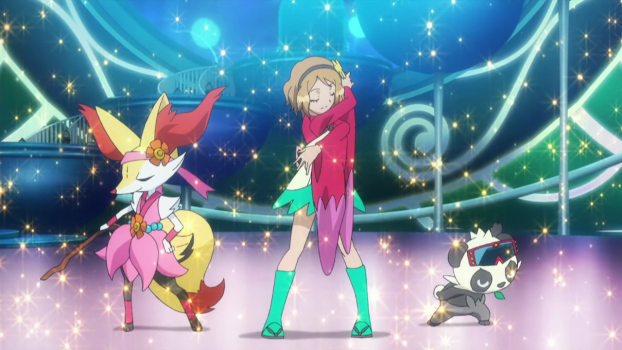 The time has come for Serena’s second showcase. After the disaster in her last showcase which could have been avoided, this episode marked a big step forward for Serena’s dream of becoming a Pokémon Performer and you can tell she is even more determined now.

The return of Miette from the episode “A Battle by Any Other Name” was a great inclusion into this episode. It made sense that she would become a Pokémon Performer and true to form (her promise at the end of her first episode), she makes Serena uncomfortable and blush a lot with sly hints that she likes Ash. She doesn’t tell Ash how she feels like she said she would in her previous episode, but the scenes with Miette and Serena where Miette makes subtle hints were very entertaining. Hopefully Miette returns again so Serena will have to tell Ash how she feels about him.

The showcase in Dendemille Town had two rounds. The first being a Poke Puff bake-off (Serena narrowly winning and Miette and Jessie/Jessilia easily going through the round in their respective groups). No problems there then, but naturally it wouldn’t be interesting if Serena won without any difficulties. After Jessie/Jessilia does her second round performance she knocks into Serena in the hallway, resulting in Serena falling and ripping her skirt (which is eerily similar to Fennekin’s fall in the previous showcase). 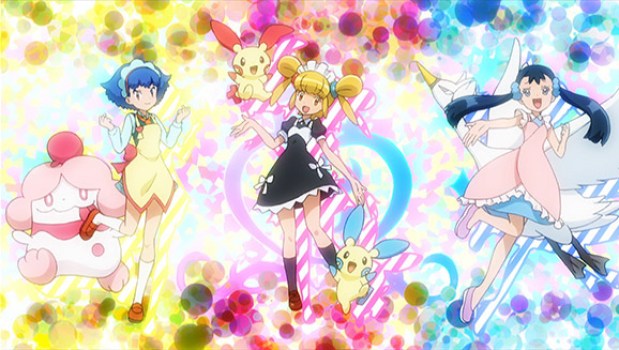 The second round was a freestyle performance (pictured at the top of this article) Serena was the last to perform and just about managed to fix her skirt in time and then gave an excellent performance with Braixen and Pancham. The tension and music in the scene that would decide the winner of the Princess Key was very well done (and even though Serena had her eyes closed at first from nervousness and wasn’t looking at the number of votes) most of the audience voted her as the winner of the showcase, earning Serena her first Princess Key on the way to becoming Kalos Queen. 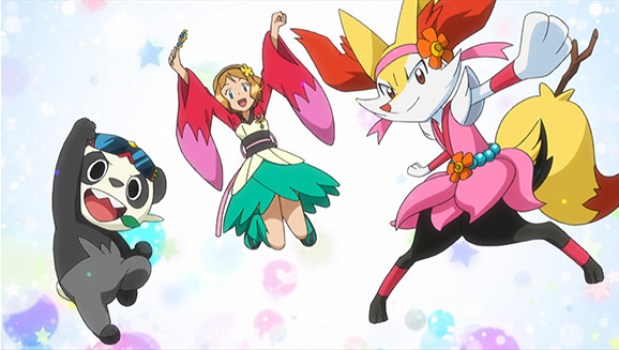 The episode ends with Serena, Ash, Clemont and Bonnie celebrating Serena’s success and the group saying goodbye to Miette (with Miette once again flustering Serena by telling her that she hasn’t forgotten about the competition for Ash).

I have to say that the cameos were really great as well. We see a number of XY characters who have supported Serena make small appearances in this episode including Grace, Shauna, Tierno, Trevor, Aria and Professor Sycamore. Sycamore definitely gets the best cameo as he tries to hug his assistants after Serena wins the first round. Priceless.

In my opinion, this episode was a really great second showcase and perfectly shows not just how determined Serena still is to become a great Pokémon Performer, but how far she has come on her journey as well and this was marked by her winning her first Princess Key. The return of Miette and the cameos from other XY characters also added to a great episode, though Serena better act fast before Miette returns again. I remember when I first heard about showcases I was worried that they would be too similar to contests, but this episode (more so than the previous showcase episodes) showed how unique they are. A truly fantastic episode and a great success for Serena on her way to becoming Kalos Queen.