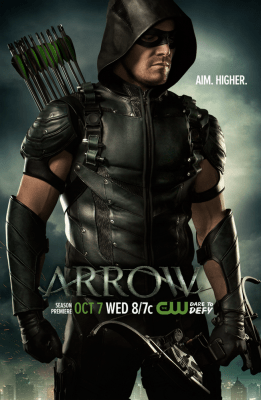 A new poster for the fourth season of the CW’s Arrow series has been released.

The poster was revealed by Arrow’s executive producer Marc Guggenheim on Twitter. It features Arrow’s new costume, the new logo, the premier date and a tagline: “Aim. Higher.”

Thoughts on the poster? What are you most looking forward to in the fourth season of Arrow?