The return of the Star Wars Battlefront video-games series is highly anticipated by many Star Wars fans. Lucasfilm and Disney know this and are doing their best to promote the release of the game. One way they’re doing this is releasing a canon novel titled Star Wars Battlefront: Twilight Company and the cover for the book has now officially been revealed. 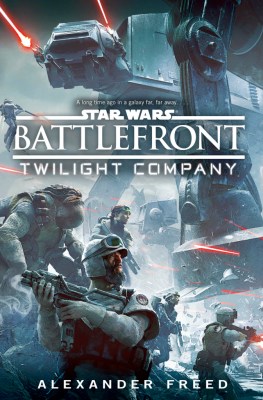 A description of the novel has also been released. It reads:

“This action-packed adventure follows a squad of soldiers caught in the trenches of the ultimate galactic war between good and evil. Here now is the exclusive reveal of the book’s cover as well as a special patch designed for the members of Twilight Company.”

Star Wars Battlefront: Twilight Company will be released on November 3rd (around two weeks before the release of the new game from EA and DICE). The novel is written by Alexander Freed.

Thoughts on the cover? Are you planning to read this book?