The Flash: Violett Beane Discusses Playing Jesse Quick as a Speedster and Her Superhero Costume 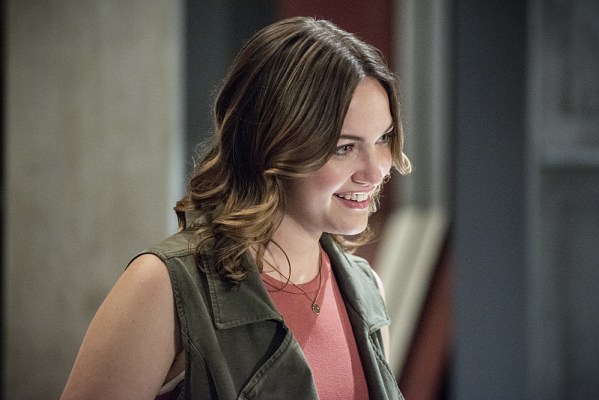 Last week we had the opportunity to interview The Flash actress Violett Beane after the episode “Magenta” aired. In the interview we talked to her about returning as her character Jesse Quick, playing the character as a speedster and Jesse’s superhero costume revealed in the episode.

On her experience playing Jesse as a speedster for the first time, Beane said:

“All of last season I was sort of just waiting and hoping, expecting it to happen. So when this finally happened I was absolutely ecstatic. It was one of the best feelings putting on the suit and just running in general. All of that. I mean, I think that anticipation building up, for not only the fans but myself, ultimately led to an amazing reveal and I was just so excited and I hope that that totally reads [on screen].”

On seeing the costume she would be wearing for the first time:

“I was pretty excited. We went back a couple of times and made some alterations and things like that but ultimately I absolutely love it and putting it on is a feeling like no other. You actually feel like a hero and it’s kind of surreal but it’s awesome and I just hope I get to wear it more this season.”

You can listen to the above extracts from the interview below:

I then asked Beane about whether the suit felt comfortable or uncomfortable to wear. She said:

“It’s really tight red leather so comfortable isn’t really the word I would use, but it sort of moulds to your body the more you wear it, like Grant’s [Gustin] is pretty much like a second skin because he’s been wearing the suit for three years. Even just in the one episode the more I wore it the more it sort of melded to me. It’s definitely pretty constricting [as] you have to work around it when you’re running. They do build it so that the things you’re doing, the stunts and things, running, all of these moving actions that you’re doing they build it around that so they think about that when they’re building it. It’s still leather and leather works in certain ways and doesn’t in others.

The more you wear it it does get more comfortable and when you’re actually in the moment and acting, doing the scenes, you’re not thinking about how uncomfortable it is.”

“Magenta” also gave viewers some big character development between Jesse and her father Harrison Wells (Tom Cavanaugh). I took the opportunity to ask Beane about getting to develop the relationship in such a big way in this episode. She said:

“I really enjoyed doing those scenes with Tom. I love doing scenes when it’s just two actors. It’s a lot more intimate and you actually have time to get into the meaning of it all. The big scenes in S.T.A.R Labs- they’re fun because everyone’s there but you’re kind of just throwing information at the audience at that point. It is really awesome to get to do those scenes and Tom’s great. He’s been awesome to work with so that’s been pretty amazing. I love developing our on-screen relationship. I think it’s really important that Wells has this moment in this scene to sort of step back and realise that she’s an adult now and she can handle situations and maybe people need her to be a hero and if she wants to be then why would he stop her?”

The Flash airs on The CW on Tuesdays at 8/7c.

Thoughts on this report? Are you looking forward to seeing more of Jesse Quick in action on The Flash tonight?

You can listen to our full interview with Violett Beane here: