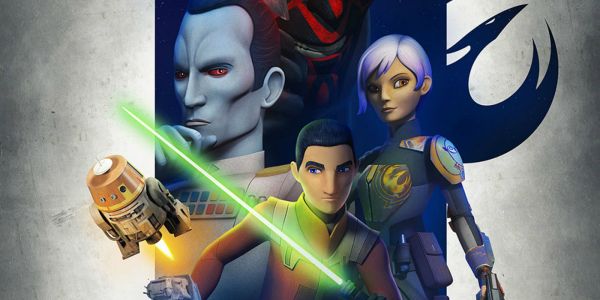 Lucasfilm and Disney have announced that the third season of the Star Wars: Rebels animated series is slated to premiere on September 24th at 8:30PM ET/PT.

The full press transcript can be read below:

This news marks the third time that Star Wars: Rebels will be airing on a new day. The first season aired on Mondays and the second season aired on Wednesdays. The third season will air on the prime time slot on Saturdays which shows the growth of Rebels as one of the most popular currently airing children’s animated series and continues the pattern of Rebels airing a new season on a different day every year.

The premiere episode will be titled “Steps into Shadow” and is an hour-long special. This gives it the same time length as the premieres of the last two seasons (“Spark of Rebellion” and “Siege of Lothal”).

The official description for the episode can be read below:

“Having established a secret base on Atollon, the Ghost Crew, now led by a more powerful Ezra, strengthens the rebel fleet by acquiring new resources and recruits eager to stand against the Empire. However, the Imperial efforts to eliminate the rebellion are now being led by the coldly analytical Grand Admiral Thrawn, whose strategic, tactical and cultural insights make him a treat unlike any they have faced before. In season three, Ezra and Sabine take on new roles and challenges, as the rebels prepare for their biggest mission yet – a direct assault on the Empire.”

Thoughts on this news? What are you most looking forward to seeing in the next season of Star Wars: Rebels?