Everything Geek Podcast- A Look Ahead to 2016

Another year has drawn to a close. It has been an exciting year at the Everything Geek Podcast. I wanted to take this time to thank every one of you who has supported us, regardless of whether you’ve been following us since we began or are a recent follower. We couldn’t continue to do what we do without your support and therefore I thank you for the support you’ve shown us.

It’s hard to believe we only started our podcast in 2013 as so much has happened since. We’ve now interviewed over 100 guests and it has been a pleasure to interview everyone who has given their time to talk to us and tell their stories. 2014 ended on a strong note for us when we had the opportunity to interview big-name actors Ryan Gage (The Hobbit) and James Arnold Taylor (Star Wars: The Clone Wars), but 2015 was a much stronger year for us with more big-names joining us. Interviews that I was particularly excited to conduct this year included Gary Kurtz (Star Wars), Chloe Bennet (Marvel’s Agents of S.H.I.E.L.D), Sarah Bolger (Once Upon a Time), Erin Cahill (Power Rangers), Murray Gold (Doctor Who), Reggie Lee (Grimm), Robert Kurtzman (Horror), Chris Chalk (Gotham) and Samuel Anderson (Doctor Who). However, everyone we have interviewed have been a joy to talk to and we look forward to welcoming more guests onto the podcast in 2016.

However, the highlight of the year for us was undoubtedly the launch of our very own website (which you are reading this article). I spent five months working on it this year (May-September) and I’m very happy with the finished website which already has over 700 views. The launch of our website was very exciting for me and I’m thankful to everyone who was patient while we worked on it and have been checking our website since. Our website has already had viewers from 35 countries and it means a lot to me that we’re reaching people in many different countries. We’ve always aimed to appeal to as many geeks around the globe as possible and it’s great to know we’re doing just that.

The launch of our website proved (beyond any doubt) that we’re really becoming a bigger podcast, but getting invited by the BBC to attend a press screening of Doctor Who also showed the progress we have made in just over two years. Unfortunately I was unable to attend but it meant a lot for us to be invited by the BBC themselves.

As you can tell, 2015 was a big year for the podcast but we’re hoping that 2016 will be even bigger. Our priority for the year is to finally set up an iTunes account (as this has been requested by numerous followers) and to get our Everything Geek Comic Cast broadcasting on a weekly basis. We have other plans but those two are the priorities for 2016. We’re also going to look into setting up our own phone app soon as we know a number of our listeners only listen in on mobile devices.

I already mentioned the guests as we had a lot of great guests join us in 2015 and we’re hoping that 2016 will bring us many more great interviewees. 2016 is going to be a big year with the vast number of geeky movies and TV shows coming out and we’re hoping to have special guests from a lot of these to provide interviews for you. We’re in talks with guests from most of these already and some we think are very likely to appear on the podcast in 2016. Our first guest of 2016 was scheduled earlier this week.

Thank you again for your support and I hope you’re excited for more content from us in 2016.

Ruari Williamson, Founder of the Everything Geek Podcast 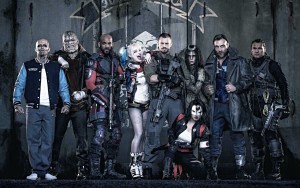 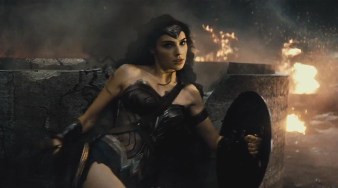 The CW Television Network has announced two special programmes that it will be airing on January 19th. The specials will be accompanied by a new trailer for the Suicide Squad movie and the first footage from the Wonder Woman movie.

Details on the two specials read as follows:

“First up is DC’s Legends Of Tomorrow: Their Time Is Now, beginning at 9PM ET, which will feature an in depth look at the origin stories of the heroes and villains behind the highly anticipated show Legends of Tomorrow. The special will include interviews, clips and more from executive producers Greg Berlanti, Marc Guggenheim, Andrew Kreisberg, Phil Klemmer & Wendy Mericle. For fans looking to get a better understanding of who the villainous Vandal Savage is, is surely going to want to tune in.

Then, at 9:30 PM ET, keep your televisions locked on CW as they’ll premiere DC Films Presents: Dawn Of The Justice League which will give fans the inside look into WB’s upcoming films that everyone has been waiting for. Hosted by Kevin Smith, the special will feature a look at Batman V. Superman: Dawn of Justice, the all-new trailer for Suicide Squad, and a sneak peek at the Wonder Woman film. WB & CW promise never-before-seen footage, interviews with stars like Ben Affleck, Henry Cavill, and so much more.”

The Suicide Squad movie is scheduled for release on August 5th, 2016. The Wonder Woman movie will follow with a release date of June 23rd, 2017.

Thoughts on this announcement? Are you excited for the new Suicide Squad trailer and first Wonder Woman footage? 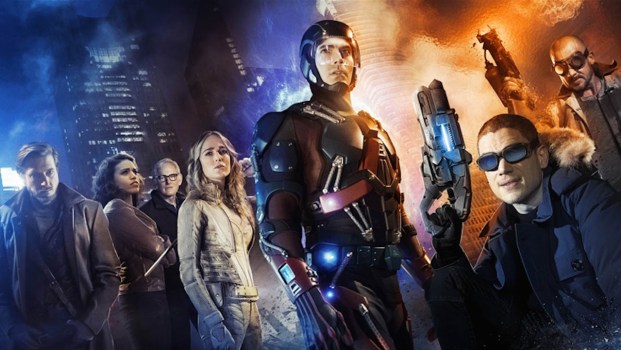 A new trailer for DC’s Legends of Tomorrow series has been released by The CW.

The trailer is titled “One Chance” and you can watch it below:

The Legends of Tomorrow series is set to debut on January 21st, 2016.

Thoughts on the trailer? Are you looking forward to the premier of Legends of Tomorrow? 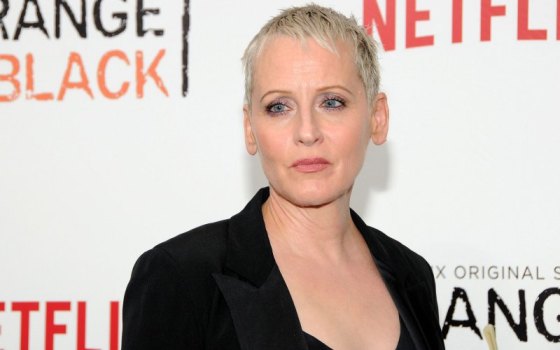 Lori Petty (Point Break, Orange is the New Black, Tank Girl) has been cast as Jeri in Gotham.

A description of the character reads as follows:

“Petty will play Jeri, the flamboyant and enigmatic hostess of an underground club where mass murder and art are celebrated in equal measure. Jeri gives clues to Bruce Wayne (David Mazouz) during his hunt for his parents’ killer, but she and her gang of merry maniacs are less helpful when Jim Gordon (Ben McKenzie) comes calling.”

The above description tells us that Jeri will be an important part of Matches Malone’s story arc on Gotham.

Thoughts on this casting? Are you excited to see Lori Petty as part of the Gotham cast? 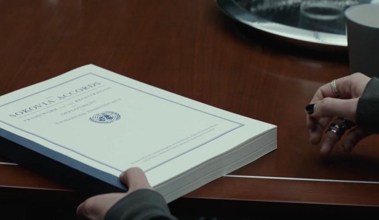 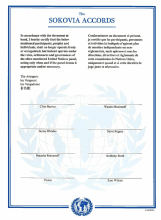 The Marvel Studios Phase Two boxset has revealed new details on the Sokovia Accords that will feature in Captain America: Civil War.

The Sokovia Accords serve as the film version of the Superhero Registration Act from the Civil War comic series. The new details read as follows:

“In accordance with the document at hand, I hereby certify that the below mentioned participants, peoples and individuals, shall no longer operate freely or unregulated, but instead operate under the rules, ordinances and governances of the afore mentioned United Nations panel, acting only when and if the panel deems it appropriate and/or necessary. -Sokovia Accords”

Captain America: Civil War is scheduled for release on May 6th, 2016.

Thoughts on the new details? Are you excited to see how the Sokovia Accords affect the story of Captain America: Civil War?

Legends of Tomorrow- The Flash’s Cisco to Appear 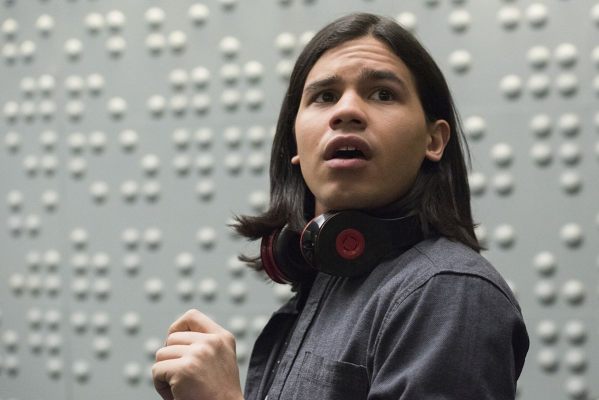 Cisco (played by Carlos Valdez on The Flash) will be appearing in DC’s new Legends of Tomorrow series.

Details on Cisco’s role in Legends of Tomorrow are being kept under wraps, but Valdez has teased that the new series will have an “interesting take” on his character.

The Legends of Tomorrow series is set to debut on January 21st, 2016.

Thoughts on this news? Are you excited to see Cisco show up in Legends of Tomorrow? 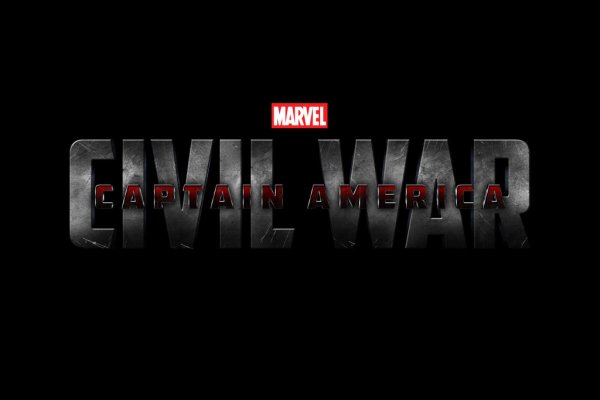 New details on the big superhero fight scene in Captain America: Civil War have been revealed.

This scene sees all of the Avengers taking part in a massive fight scene. The details read as follows:

“Black Widow beats down Ant-Man while Hawkeye and Scarlet Witch attack…something…in the sky (you can’t tell what, since the VFX aren’t done yet). Iron Man is locked onto Captain America, flying into place and slugging it out with Cap despite some practical issues (the camera was too close for Chris Evans to keep throwing punches without hitting it). The scene, they say, wraps with Iron Man knocking Cap to his knees, “but he won’t stay there.”

Captain America: Civil War is scheduled for release on May 6th, 2016.

Thoughts on the new details? Are you excited for the release of Captain America: Civil War? 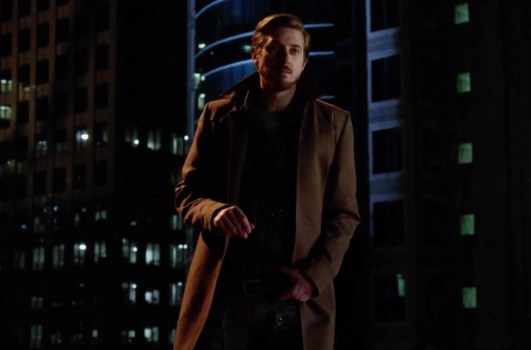 A new TV spot for DC’s Legends of Tomorrow series has been released by The CW.

You can watch the TV spot below:

Legends of Tomorrow is set to premier on January 21st, 2016.

Thoughts on the TV spot? Are you excited for Legends of Tomorrow to begin airing? A new trailer for Lego Marvel’s Avengers has been released by TT Games titled “Open World”.

Lego Marvel’s Avengers is set for release on January 26th, 2016.

Thoughts on the trailer? Are you looking forward to playing Lego Marvel’s Avengers?

The final three Lego sets for the highly-anticipated Batman v Superman: Dawn of Justice have been revealed.

“The LEGO Super Heroes Clash of the Heroes set captures an iconic moment from the film’s trailer, with the Dark Knight and the Man of Steel meeting in front of the Bat-Signal. The 90 piece set features minifigures for both heroes, a Bat-Signal that rotates and explodes, and a buildable kryptonite bazooka. The set goes on sale Jan. 1, with a retail price of $12.99.” 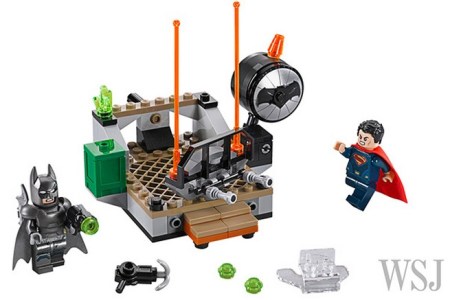 “The Lego Super Heroes Kryptonite Interception set features Batman’s iconic ride, the Batmobile, with opening doors. At 300 pieces total, the set also feature minifigures for Batman and two LexCorp “henchmen,” a forklift, and Kryptonite. The set will be released Jan. 1, and is priced at $29.99.” 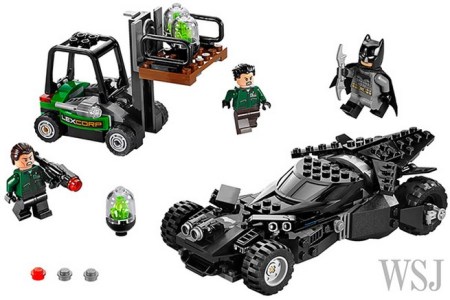 “The Lego Super Heroes Untied: Sky-High Battle features both the Batwing and Lex Luthor’s LexCorp helicopter. The Batwing has foldout wings and an opening cockpit. The set comes with minifigures of Lois Lane, Lex Luthor, Batman, Superman and Wonder Woman. The 516 piece set goes on sale Jan. 1, with an MSRP of $49.99.” 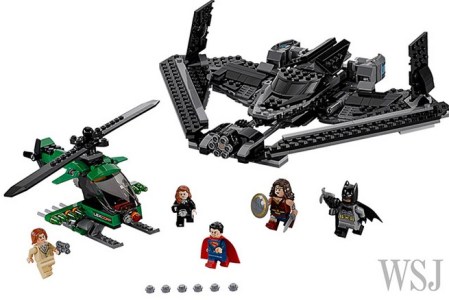 Batman v Superman: Dawn of Justice is set for release on March 25th, 2016.

Thoughts on these sets? Are you planning to buy any of them?